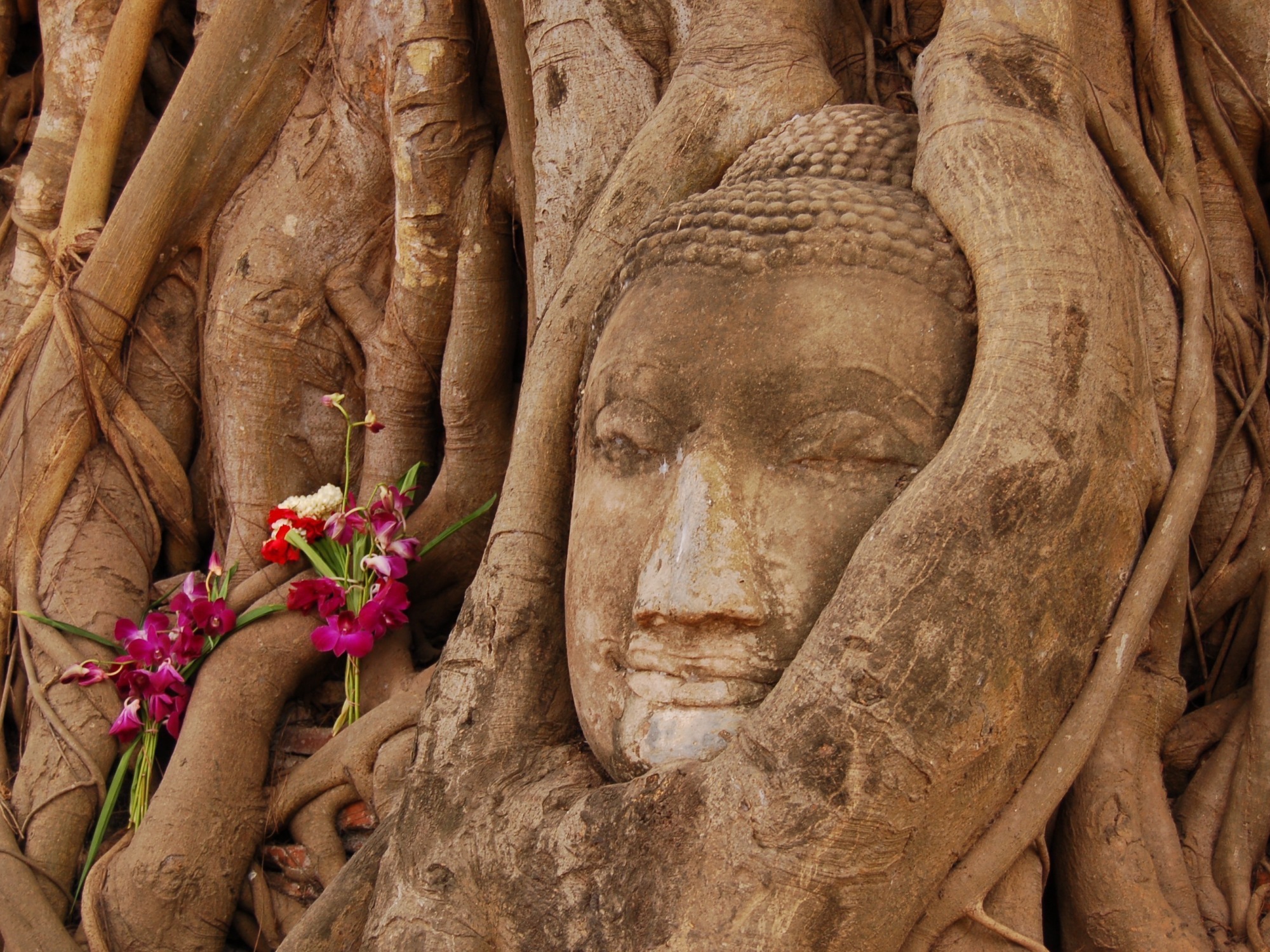 It was a humid Bangkok morning when I made my way to the central train station,  and the place already smelled like a fermented corpse. There are easy ways and hard ways to get to Ayutthaya. Easy ways include taking a cruise up a river, getting an air-conditioned taxi, or boarding a tour bus with snacks and a toilet in the back.  Hard ways include walking, taking a donkey, or in my case, boarding a comically slow train dating from 1932 and riding north from central Bangkok in a cloud of diesel fumes.

I recommend the hard ways. They probably make you a better person, or at least a more smug one.

After a couple of hours of diesel-induced narcolepsy, I arrived in Ayutthaya. Ayutthaya is the former capital of one of the pre-modern Thai kingdoms, and was abandoned after being captured and destroyed by the Burmese in the 18th century. Ruined cities are one of my favourite things, so I was very keen indeed to make the trip there. My travelling companion was less interested, but my rambling evocation of the wonder of ruined places managed to convince her.

Let me be honest. I bullied her into going. But she was very charitable about it.

The historical park is embedded within the modern town and is not particularly well fenced off, so I started to see ruins within a couple of minutes walk from the train station. When I visit places outside Australia I’m amazed by how the signs of the past are just lying around for all to see. The ancient and modern are integrated and overlap in space like a room that has been repeatedly repainted but where the walls have been abraded by badly behaved children. This all feels profoundly weird for someone who comes from a city where there is nothing much older than 1880.

Ayutthaya was clearly a wealthy place, given the number and size of the remaining buildings. Historical records indicate that diplomatic contact existed between the Kingdom of Ayutthaya and several of the major states of Europe, and in particular was friendly with the court of Louis XIV of France. The kingdom was wealthy, not least because its location on the floodplain of the Chao Phraya river floodplain allowed extensive rice cultivation and easy transport throughout the kingdom and abroad.

The city was laid out on a grid system, but due to the passage of time most of the smaller structures have been destroyed. Naturally there is very little left of the commoners’ dwellings.  The large prang remain, reliquaries which stored religious items, and a number of walled Buddhist monasteries. From a distance the site resembles piles of builders’ red bricks melded with a forest of pointy towers. I often feel ignorant visiting Asian sites because my knowledge of the cultures and periods involved is so limited, but it didn’t seem to matter in Ayutthaya. Although I didn’t really know what I was looking at, wandering around was quite magical.  The degree of preservation is impressive, so the variety of strange-looking buildings was mysterious and fascinating rather than simply baffling.

My main regret with visiting Ayutthaya was that I was only there for half a day. I found myself having to rush back to the train station to clamber back on board the Carriage of Suffocation for the trip back to Bangkok. Perhaps one day I’ll be able to swing a stopover in Bangkok while going somewhere else, whereupon I will do the smart thing and take a taxi.

One thought on “Diesel fumes and ruined temples – Ayutthaya, Thailand”