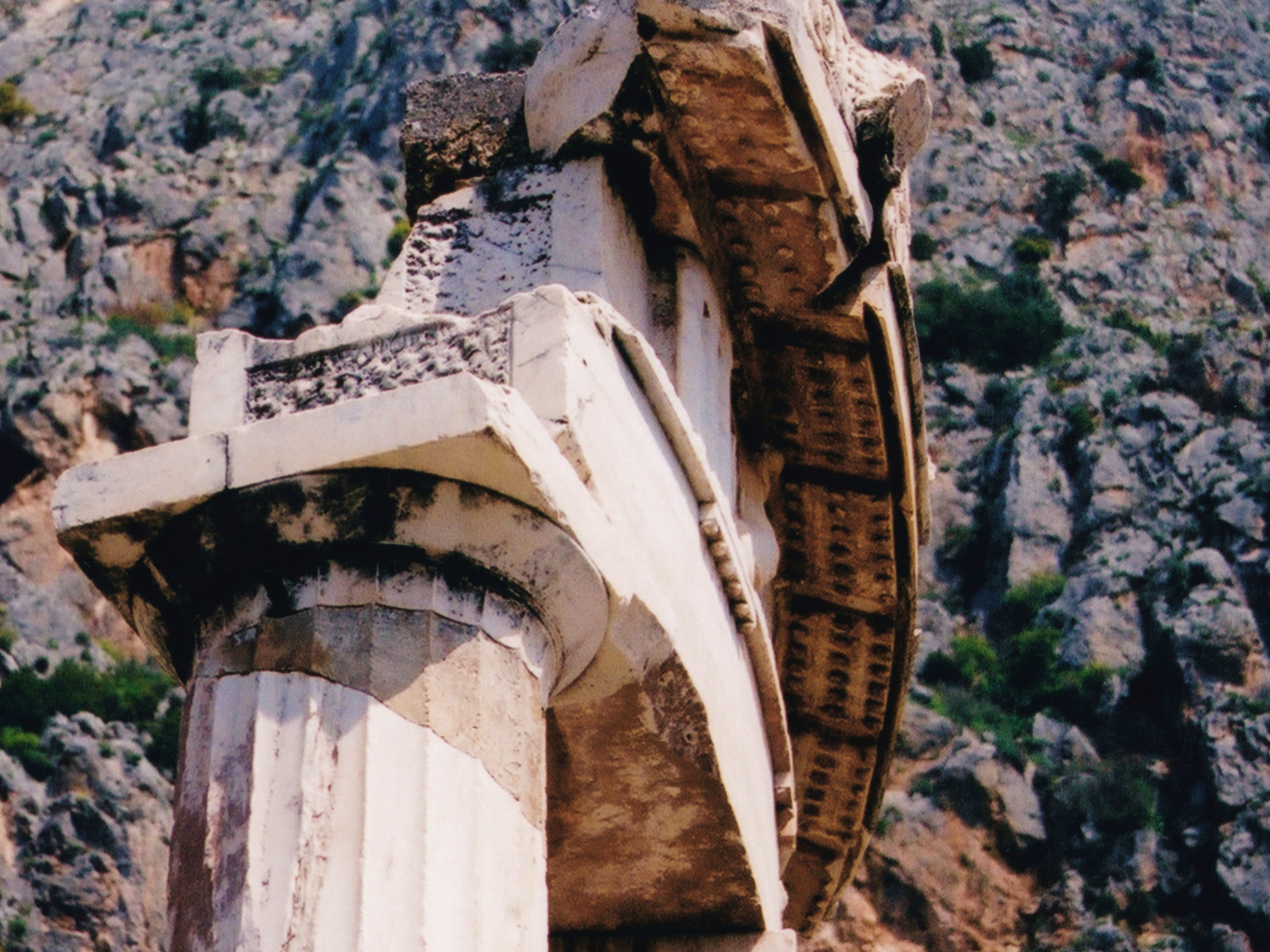 Civilisation collapsed in Greece and the Eastern Mediterranean in the late second millennium BC and we don’t know why. Something strange happened, maybe several somethings. Empires fell apart, and were invaded or had their palaces were consumed by fire. Barbarian pirates roamed the waters and toppled kingdoms. The island of Thera exploded. Entire cultures were wiped off the map and Greece plunged into a localised dark age. The Mycenaean and Minoan cultures disappeared, only to live on in song and myth.

But a dark age is merely a time of transition between two other periods. And few sites illustrate this better than the sanctuary at Delphi in central Greece.

Since very ancient times Delphi was believed to be the centre of the world. According to legend, Zeus dispatched two eagles from the edges of the world; they met over Delphi.  It seems likely that there was a Mycenaean shrine on the site of Delphi in the distant past, and that even more interestingly it may have had Minoan (Cretan) priests who were shipped in to operate it.

This earlier site was probably dedicated to Python, a dragon or serpent who lived there, from whom we get the English word. Python may have been an Greek deity, perhaps borrowed from elsewhere in the Eastern Mediterranean as there was something of a fashion of snake worship. This was apparently particularly common in Crete, which helps to explain the Minoan gästarbeiter.

Sometimes a cigar is just a cigar

Where it gets interesting, is that the main mythic tradition holds that Python was slain by the Classical Greek god Apollo, and the temple site was rededicated to him in thanks. The name of the high priestess echoes the original identity though – she was called the Pythia. This story is ripe for allegorical and pseudo-archaeological interpretation. Robert Graves believed that it represented the takeover of a former Mycenaean site by invaders from the north. Nietsche and others believed that the destruction of a primitive monster at the hands of the most rational of the gods represents the transition from a primitive animal existence to one defined by reason.

Regardless of the origin of the story, by the Classical period of Greek history the oracle at Delphi (the Pythia) had become one of the most revered individuals in the ancient world and Delphi itself was a site of pilgrimage from across the Mediterranean. It remained so for hundreds of years, until a particularly uncompromising Roman Emperor of the Christian persuasion forced its closure on the grounds of heresy.

Death by bus or lion

My visit was mildly terrifying. Lacking a car I, caught a bus up from Athens which trundled around the mountain passes with all the elegance of a sedated rhino. I had images in my mind of tumbling into the valley below and being smashed to bits on the rocks of the valley floor.

The ruined site is still extremely dramatic. Built on a hillside in a region of plunging valleys and lactate-inducing peaks, I can see why the ancients felt it was a place of power. Not much is left of the original site, and what remains has been reconstructed as much as possible to give an indication of what originally stood there. A miscellany of ruined temples and tumbledown hunks of stone give the place an air of mystery; but probably not what the creators intended.

Still nursing a panic disorder following the bus ride, I visited the nearby archaeological museum to try to delay the time before I had to get back on the bus. Like in many such museums the displays lack psychological impact due to being separated from their place, but I understand the logic of preservation. I was particularly taken with a rather good marble frieze featuring a greek solder being attacked by a small lion, which is attempting to tear apart his rib cage. Wearing his helmet he looks startled, rather than appalled.

I have no memory of my return journey to Athens. That is probably for the best. Legend says that the Pythia used to make prophecies under the influence of gases which seeped from the rocks. Perhaps I received a dose of that. Or perhaps a human brain can only cope with so much terrifying driving in one day.