Property 600 – Paris, banks of the Seine

It’s nearly impossible to talk about Paris without being caught up in the idea of Paris. This city, more than any other, gets held up as an impossible ideal of romance, beauty and perfection. I’ll be honest though – like most dreams this one doesn’t compare with reality.

This is probably an unpopular view to have, but I have never been as captivated by Paris as everyone else seems to be. I mean, it’s perfectly fine, but the couple of times I’ve visited haven’t been highlights of my life. My friend Hamish adores the city and feels very at home, but I expect it’s easier for him given his facility with the French language. Mrs World Heritage thinks that Paris is the most beautiful place in the world and that the illuminated Eiffel Tower is utterly magical. Perhaps I visited at the wrong time. Perhaps it’s just me. Perhaps I’m just feel that the idea of Paris is totally over-exposed and can’t live up to the reality of a modern, working city. 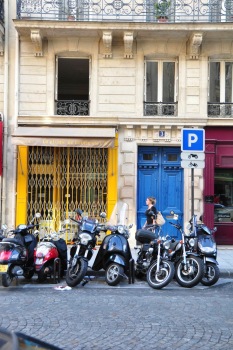 The first visit that I recall was in 2001, although I know I had been already as a child. It was midwinter and I was taking a weekend trip from London. It rained and was foggy the entire time. The Tower was invisible from above the first landing. I was a starving student and I recall subsisting largely on supermarket-bought cheese. This coloured my view of things. I didn’t hate my trip, but I found it hard to enjoy the ecstasies that my friends were experiencing.

2010 saw me visiting with Mrs World Heritage and spending a few days there before setting out southwards for a wedding in Burgundy. I enjoyed it certainly, but I think much of my pleasure was vicarious, seeing as Mrs WH was utterly enraptured. We wandered round for a few days and I ate the obligatory snails. We scampered about the feet of the tower and enjoyed taking photos of it peeking between buildings. The city feels like an open air museum, not something I would ordinarily object to, but it all felt a bit forced. There was never a feeling of being able to get away from other tourists (I am aware of the irony of that statement) and just be present. Even the famous French rudeness was nowhere to be found, instead replaced with mild superciliousness from multilingual waiters. We didn’t visit any sights in particular that trip, mainly just wandering in alleyways and drinking wine (her) and Pernod (me). By far my most memorable experience was the hair-raising experience of learning to drive a car on the right hand side of the road while simultaneously attempting to navigate my way out of central Paris.

My most recent visit in 2015 was another weekender from London where again it rained. We stayed in a ridiculously swanky hotel which had a view of le Tour from the corner of the gym. With child in tow we were able to visit far more of the traditional tourist sights, although the patience of the 3-year old quickly wore thin. Most of the sites were viewed from the exterior as there was no possibility of convincing a child to wait in the queue for the Louvre. I satisfied myself with spotting Napoleonic bees on the exterior of the building.

Paris has a reputation for being stunningly beautiful, and I suppose it is. Much of that is due to the extensive demolition and urban-design work of Baron Haussman in the nineteenth century. Relatively little of the medieval city plan remains and although it’s a more beautiful place I feel like something has been lost. The city has been cleaned up and polished to cater for the (admittedly enormous) tourist trade but it seems strangely charmless to me. The marks of the past are everywhere, but they’re also pointed out and labelled. There doesn’t seem to be much left to discover for oneself. I love to think of the skeleton of the medieval city lying beneath the nineteenth century renovations, but they’re difficult to see through the sleet.

As I discussed with Hamish, I think one of the reasons I like London so much more than Paris is that much of my upbringing was based on British TV and other cultural exports. By comparison he grew up in a Francophone household and accordingly his ideas of “home” are set beside the banks of the Seine rather than the Thames. I envy him really – I am sure there’s much more for me to understand and love about Paris that I’m missing. But I’m just having a hard time finding it.

2 thoughts on “Paris, the most idealised city in the world”