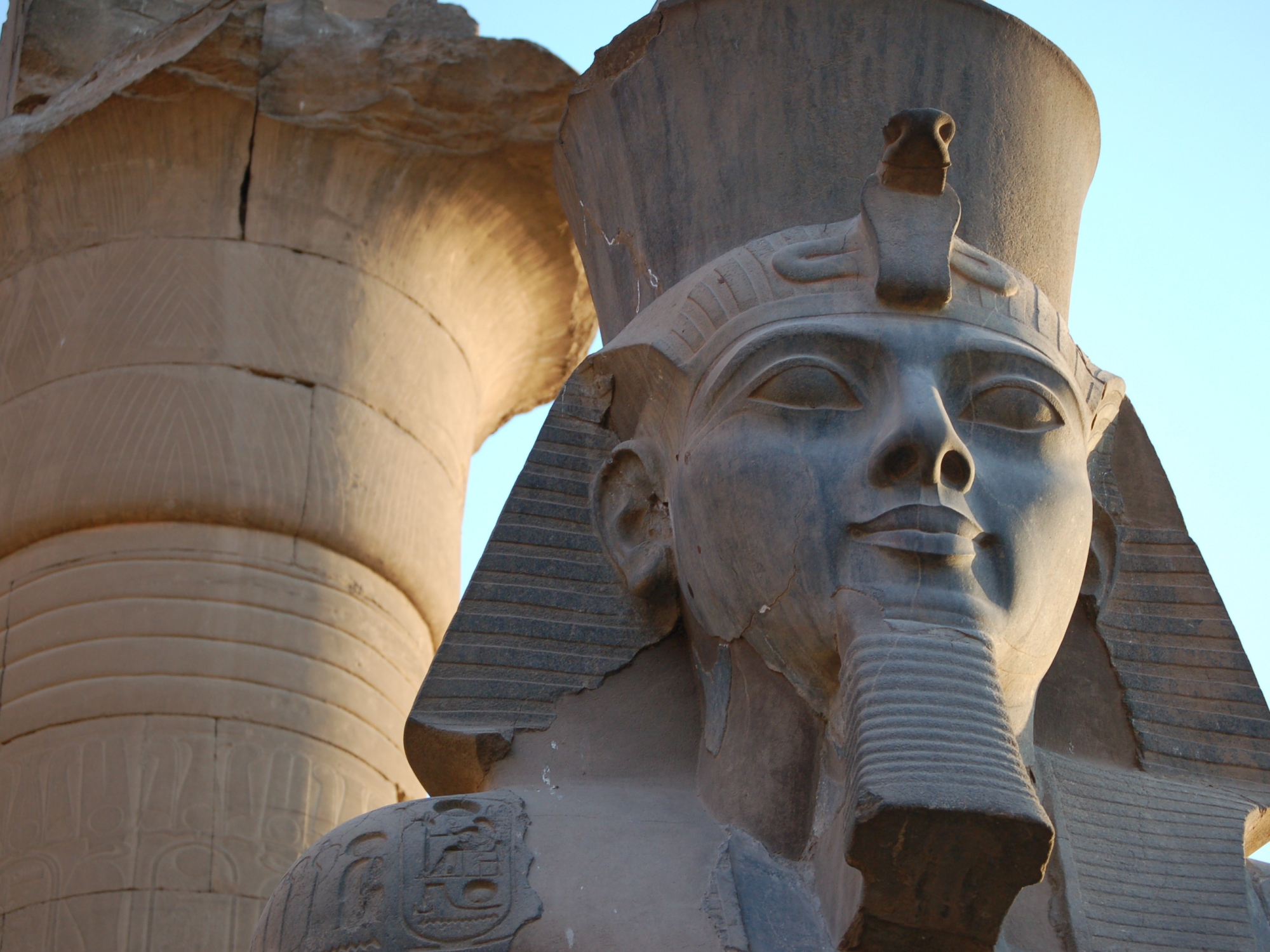 My train rolled into Luxor in the early hours of the morning. I’d been travelling overnight from Cairo and had shared a sleeper cabin with an affable Belgian man. This had dual pleasures – being able to talk to someone in English (hooray for European education systems) and also being able to buy an alcoholic drink in an Islamic country without being furtive. The golden days of train travel are past, but cabin drinking is an unalloyed pleasure.

This being Egypt in summer, it was ridiculously, ludicrously hot. I took refuge in my cheap hotel and collapsed on my bed. I was so confused and dehydrated that it took me half an hour to register that there was an air conditioner in the room. It only seemed to circulate the air gently and make a clattering noise, but I took comfort in the idea that someone had made a token effort to stop this country killing me.

I was pleased I’d arrived. I was here to see some cool stuff.

Luxor is the modern town on the Eastern bank of the Nile. It is built on the site of a vast ruin, covering miles and miles, which used to be Thebes, the capital of the Kingdom of Egypt during most of the New Kingdom period. Thebes is actually a heavily transmuted Greek version of the name of one of the large temples. The Egyptians called the city Waset, which to me sounds like a noise you make clearing your throat. Ancient Egyptian is an unromantic language.

Although the pyramids had long since been constructed, this was actually Egypt’s golden age. It dominated most of the eastern Mediterranean, with a formal empire stretching up into the Levant and cultural influence spreading much further. As you would expect, the ancient city was appropriately grand and some large temple complexes remain. But the stand out sites are on the Western bank, in the direction of the dying (setting) sun – the Valley of the Kings. This is where Tutankhamun and numerous other pharaohs were buried in underground tombs, the fashion for building pyramids having abated.

Once I’d rehydrated with about a gallon of water I set out to explore. In many ways the whole area is one big ancient ruin, but I was keen to see a couple in particular. The Great Temple of Karnak and Luxor Temple are both within the town limits, and both are remarkably huge. Karnak was the main temple for the whole of Egypt for most of its history and for me the most remarkable part is the immense columns in the Great Hypostyle Hall. They’re so Egyptian – simple lumps of stone, but heaved into improbable configurations by an enormous workforce.

Luxor is imposing in its own way, with an immense wall and rows of statues of famous Pharaohs. There has been some debate about the purpose of this temple, but it seems likely that it was dedicated to the soul of the Pharaoh, and may have been where they were crowned. After the decline of the Egyptian Kingdom this site was used successively as a barracks for Roman troops, and later still as a residential quarter.

These temples are grand, but it’s over the river where the real fun started for me. I took a cab across the bridge one morning, which was a mistake due to the unfortunate marriage of the molten vinyl seats and my thighs. It was worth it though. I got to see Ozymandias.

Growing up, my family was the kind of place where one might hear random snippets of poetry being recited at inopportune times. One of these poems was “Ozymandias” by Shelley, a rather dour  comment on the ephemerality of power. It refers to the so-called Colossi of Memnon – just the most monstrously huge things to be found in a country full of big pieces of stone. The Colossi are two seated figures made of stone, eighteen metres high, which once formed part of a now-missing temple. They can be seen from miles away and are just sitting there in a field. The pyramids are bigger, but they’re not shaped like people. Astonishing.

Behind the Colossi lies the Valley of the Kings, the burial site of most of the later Egyptian Pharaohs. This is site of the tomb of Tutankhamun, the only tomb to have been found un-robbed. The Valley is yet another in a series of hot, dry and dusty parts of Egypt, but is surprisingly small given the large number of tombs which have been crammed into it. The location of the Valley is significant, to the West of Thebes proper. Seen from there, the sun setting behind the mountains to the West was symbolic of death, a recurring theme in Egyptian culture. On reflection I’m not surprised that most of the tombs were robbed – it wouldn’t have taken too much exploration to find where the recent digging had taken place.

Many of the tombs are open to visitors. That surprised me at first, but I guess they’ve been open for a couple of thousand years already. How much more damage can be done by properly corralled tourists? Most of the tombs are surprisingly small, in particular Tutankhamun’s. There’s some suggestion that he died unexpectedly, and that he was buried in a smaller tomb meant for someone else, which explains why his burial goods were piled up haphazardly. There has recently been some speculation that Tutankhamun’s tomb may have a hidden chamber where someone else, possibly Nefertiti, is buried.

I stuck my head into a few more tombs before heading home. Luxor is a monster. The climate is crushing, which makes me wonder why people ever thought it was a good idea to live there. Also, it doesn’t take long to develop a severe case of ruin overload. Any of the major sites within this property would merit World Heritage nomination on their own, and there are a number that I haven’t mentioned. I’d love to go back, but this time I’d take a week and try to let it soak in. I left shellshocked and baffled, and flew to Singapore a few days later.

One thought on “City of the Dead – the Necropolis of Thebes”