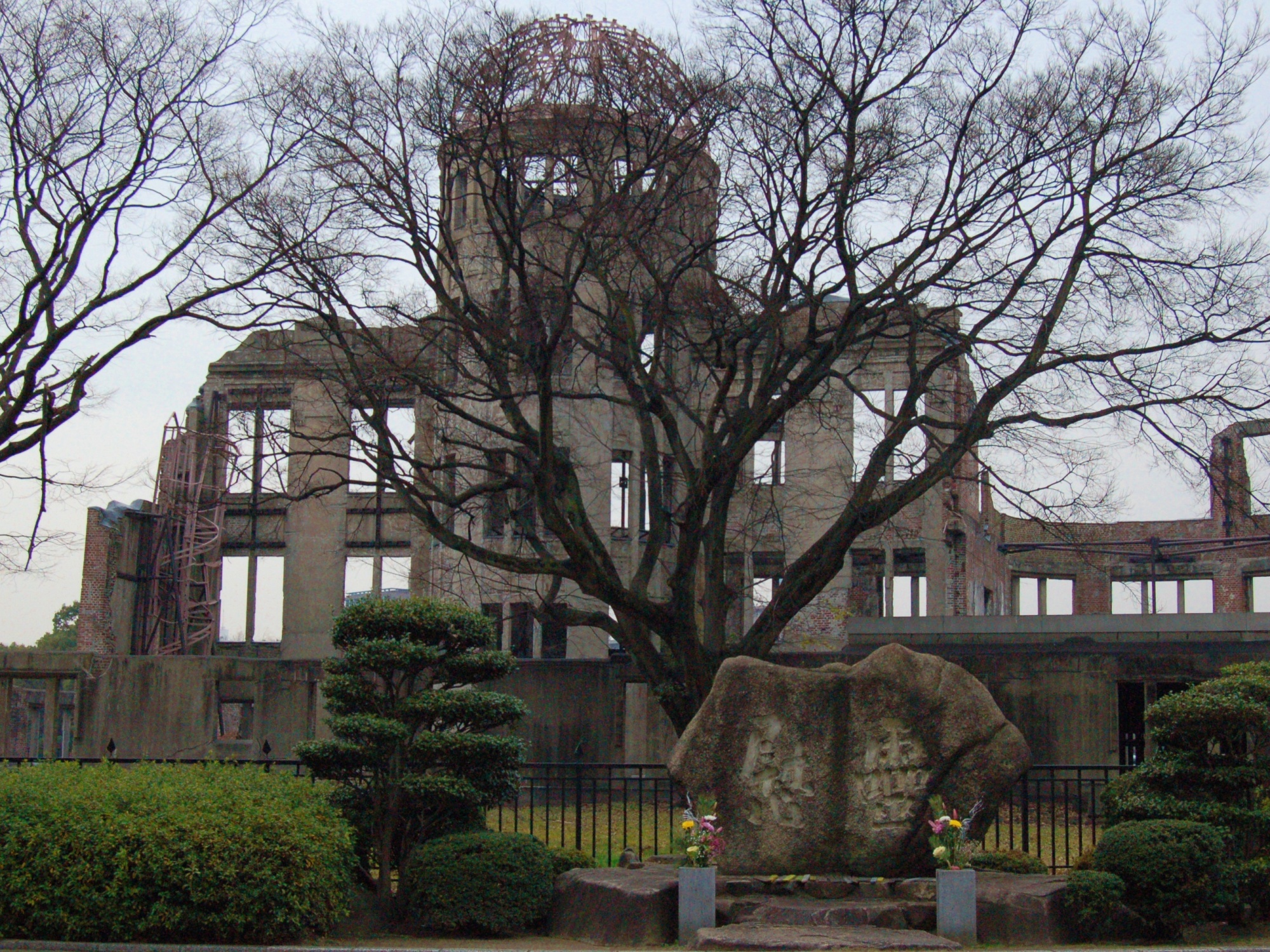 After visiting the Hiroshima Dome, I went around for several weeks making toasts to “world peace”. I don’t normally toast anything, not even bread. Hiroshima has that kind of effect on people.

The basic story of this site is pretty well known. In the closing days of the Second World War, the United States dropped two nuclear weapons on Japanese cities, which was followed shortly afterwards by the surrender of Japan.* 70,000 people were killed in the Hiroshima bombing, and another 70,000 died shortly afterwards from the effects of radiation. Much of the city was annihilated in a moment and the political landscape of the world was altered just as quickly.

The Hiroshima Peace Memorial, known as the Genbaku (“A-Bomb”) Dome, is the ruin of a building which was 150 metres from the hypocentre of the dome. The Genbaku Dome started life as an exhibition hall and dated from 1915. Although it was so close, the building survived destruction due to the detonation of the bomb almost overhead – the structure was able to withstand the downward force from above, whereas other buildings were swept away horizontally. Nothing else in the area survived.

After the war the Genbaku Dome was initially going to be demolished, but was eventually retained as a kind of memorial to the horror of war, much as some destroyed buildings were retained in Germany. I think the changes in Japanese and German cultures following the War is fascinating from a sociological view.  Germans now prize boringness, stability and a strong Social Democratic society, almost the inverse of Nazi-period culture. The transition in Japan has been a bit different, but the strong cultural emphasis on peace and non-aggression – both at individual and international levels – is very hard to miss. Films from the 1950s such as Godzilla have a powerful anti-war message which must be because of the nuclear destruction of two Japanese cities.

The overall gravitas of the site is hard to miss. The entire area has now been turned into a peace park, with an attached museum. I found the museum itself to be mildly irritating due to how it downplayed Japan’s aggressive role in the war, but the abject horror of nuclear weapon use is hard to come to grips with. The museum building is rather stern in a 60’s Brutalist kind of way but the overall greyness fits with the general vibe.

In the central plaza across the river from the Genbaku Dome area there is an exhibition of origami cranes – symbols of luck, especially when folded in batches of one thousand. A Japanese girl named Sadako Sasaki, who survived the atomic bombing but later developed leukaemia, started the association with the peace memorial. She died before folding her requisite 1,000, but her classmates continued after her death. Since then Japanese school classes sometimes fold thousands of cranes which are then displayed at the Eternal Flame of Peace at Hiroshima. At the time that I visited there were half a dozen strings of cranes which were like a slash of colour in the overall grimness of the site.

I have to admit that I got a little emotional at Hiroshima. I could make all kinds of excuses to explain this temporary departure from my normal taciturn ruggedness – the weather was super grey, I was tired after weeks of travel, I was probably hungover. But the truth is that endless photos of burned and screaming civilians in the aftermath of a nuclear bombing is going to bring you down. It seemed particularly affecting because the low-key, polite fatalism of Japanese culture seems to underscore the horror. I imagine that if another country had been the victim of the A-Bomb it would have been remembered with wailing and emotional collapse, rather than this strange kind of stoicism.

When I left, I was rattled. The selection of this site for the UNESCO World Heritage list is a little unconventional, and apparently the American delegation was opposed to the nomination. But I suppose that horror and destruction is part of the heritage of the world as much as anything else. If nothing else Genbaku Dome is a reminder of human awfulness. In an even handed display of human achievement, it must receive equal time with displays of human beauty and wonder.

*Interestingly, Kyoto  was one of the initial targets for the bomb, but was replaced by Nagasaki after heavy lobbying from some elements of the American government.