I love Istanbul.  I’ve visited it twice and I feel that I’ve barely scratched the surface of this fascinating place.  The current city is a monstrous urban agglomeration and is not without its challenges, but the history of the place is colourful and dramatic to an unprecedented degree. Istanbul would have to be a frontrunner in the competition for “Capital City of the World” if such a title could be conceived. 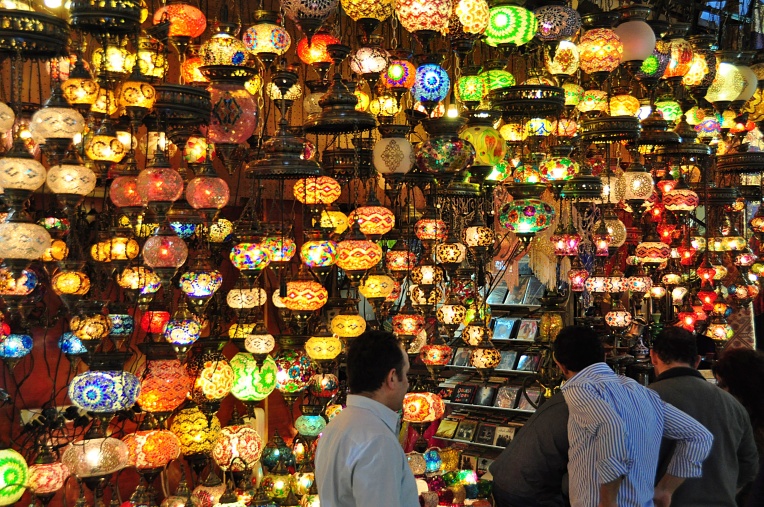 The original Greek city on this site dates back to the first millennium BCE. Various waves of Persians, Macedonians, Seleucids and others passed through and occupied it at various times, until it was semi-permanently claimed by the Roman Republic.  After four hundred years of relative tranquility the Emperor Constantine had decided to split the empire into two halves, and chose for himself the rich eastern half. He opted for Byzantium as his capital due to ease of defence and named it after himself.

Over the next thousand years the Eastern Roman Empire kept the flame of Roman civilization alight and was a repository for much of the ancient knowledge which was lost after the fall of the West. This “Byzantine” empire seemed like a permanent fixture (apart from a brief occupation by crusaders in the 13th century), surviving new Persian empires and the new Islamic religion, until it was finally battered into submission and occupied by the Ottoman Turks in 1453. Turkish Islamic culture was overlaid on Greco-Roman culture, and eventually morphed into the culture of the Turkish Republic in the 1920s.

What I hope to make clear from this potted history is just how long Istanbul has been around, and how every square inch of the city has been fought over, built, rebuilt, and transformed in that time. However much specific elements of the city change, the ghosts of the previous cities remain. Walking around Istanbul I can practically feel the breath of the ancients on the back of my neck. To use an annoying but apt metaphor from my historical education, Istanbul is like a palimpsest – a medieval parchment where old writing has been rubbed out and new words have been written over the top.

I laughed when I learned that the historic areas of Istanbul were on the UNESCO World Heritage list.  Not because I find their inclusion comic, but because I had no idea where one could possibly begin to set the boundaries. Istanbul is the totality of human life in the form of a city. How can you define that?

I couldn’t possibly discuss all the interesting buildings and sites within Istanbul – each one alone could fill dozens of books.  But three in particular catch my interest. The building that most people associate with Istanbul is the Hagia Sophia church/mosque/museum. It’s a remarkable structure, worthy of UNESCO listing by itself.

It started life as a Byzantine (Greco-Roman) church, but was converted into a mosque after the Ottoman takeover. The dome was the largest in the world until the Renaissance and the construction of the body of the building used engineering principles which were lost in the late Roman period and not rediscovered for nearly a thousand years.  The interior has a sense of space and light that must have been dazzling for the worshippers who used to throng the halls.  Even filled with a thousand tourists chattering away one can almost hear ancient monks chanting with smoking censers. Magic.

The second building I want to mention is the Topkapi palace, the combination of command centre and residence of the Ottoman Sultans for several centuries.  It was built on the site of an ancient Byzantine fortress (Acropolis) and has views across the Bosphorus to Asia.  What I find fascinating about this huge building (which included barracks and the Sultan’s harem) is that it has a many courtyards and open spaces and is very low-rise. It looks exactly as if it had been built by people who had recently emigrated from the Central Asian steppe and who weren’t yet comfortable in cities, which is exactly what the Ottoman Turks were. The Sultan’s main “office” is a pagoda in a courtyard which is open to the air.  Visitors would sit on cushions in what is essentially a tent, just like steppe nomads. The museum on site contains an impressive collection of jewels and weapons, many of which are supposed to have belonged to the Prophet Mohammed or other famous people, which reflect the huge reach of the Ottoman Empire at its peak.

The third and final building that stands out in my mind is the beautiful Suleymaniye Mosque.  This is only five minutes walk (across the site of the Byzantine Hippodrome – now a park) from Hagia Sophia and the Topkapi Palace.  It was built around a hundred years after the Ottoman takeover and shows the development of the mature Ottoman monarchy and system of government.  It’s an architectural marvel, combining bulbous domes that look like they’ve been melted together with minarets pointing towards the sky.  The interior is a riot of colour and shade, decorated with thousands upon thousands of tiles.  By the time

that this mosque was built the Ottomans were secure in their situation and didn’t need to co-opt the buildings of the previous owners – they had developed their own unique, utterly beautiful style.

Listing impressive sites is one thing, but simply being in Istanbul is enchanting to me. My historical imagination goes into high gear just by wandering the streets. The whole place seems to breathe history, and the eagle-eyed visitor can see relics of the past around almost every corner. Unlike other ancient sites it hasn’t been cordoned off into one large museum – the city on the Bosphorus is still a a living, breathing life form.

I believe that Istanbul stands in the company of very few other cities in terms of its historical depth combined with beauty.  Possibly only Rome, London and Paris are really comparable, and I’m pretty ambivalent about the last two. If it’s at all possible, I recommend that anyone even vaguely interested in Turkey or the Mediterranean cultures go to Istanbul and stay for at least a week.  You’ll get drawn into the slightly melancholy and down-at-heel magnificence of this remarkable city and maybe, like me, spend the rest of your life wanting to go back.