I didn’t have the greatest time in Cairo when I visited.  As I wrote to a friend at the time;

Cairo is truly the pits, probably the suckiest big city I’ve had the misfortune to be polluted by.  If it weren’t for the conspicuous large pointy piles of stone on the edge of town, I wouldn’t feel the slightest disappointment in leaving.  The traffic is the main culprit – constant until about 3 am, enormously polluting, and deadly to the uninitiated.  Cairenes drive in a sort of uncontrolledly chaotic manner, where the horn and aggressive merging is the main means of making progress (or no progress) in traffic. Navigation is apparently by sonar, judging by the cacophony. I’ve seen the whole length of a narrow street blocked because two cars entered at opposite ends and neither was willing to yield to the other.  The touts are the other great bane, appearing as they do on almost every street corner at the most inopportune times: “Hey mister, where you from?  Come  in see my mother-of-pearl shop!  This one is free, no charge!”

Add to that the apocalyptic, searing heat and it was remarkable that I enjoyed my visit to Historic Cairo as much as I did. 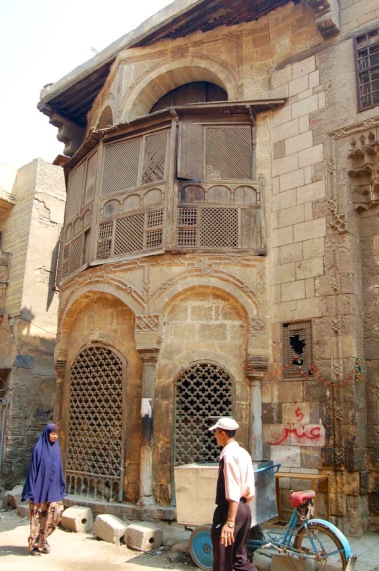 Cairo was founded in the 10th Century AD near the site of several other cities of great antiquity which had occupied the same general area.  It was intended as a troop barracks, but rapidly grew to become one of the major cities of medieval Islam.  Its high point may have been in the 11th-13th centuries, when much of the Levant was occupied by the Crusader states and the Caliphate of Cordoba in Iberia was entering terminal decline.  At its  apogee, Cairo was the cultural and intellectual centre of gravity of the Islamic world, and the largest city to be found anywhere.

The relics of this period are easy to find in modern Cairo.  All I had to do was walk in the direction of the old city and before I knew it I was wandering through twisting  alleyways, past tiny pocket mosques and through huge stone gates. The streets are so narrow that motor traffic is limited and the medieval feeling is retained.  Even the atrocious heat seems reduced by the low-rise, more human scale of the place.  Buildings have stone lower courses and screened windows above so that the occupants can observe the street without themselves being seen.  People carry on living their lives in the old quarter, much as they have been doing for a thousand years.  Small Peugeots have largely replaced camels but the hubbub of city life continues.  In Northern Europe this place would be a museum.

Lurking in the back streets

Even though I was obviously a tourist the touts barely bothered me in this part of town. It’s not such an obvious tourist attraction as the pyramids, so people seemed genuinely interested in why I might want to visit them.  The caretaker of a small mosque smelled some backsheesh and invited me to visit the interior of his property for a small fee.  I didn’t mind, because I could climb on the roof and take photos of the view – a sea of concrete apartment blocks dotted with serpentine minarets and ancient marketplaces.

A random turn down a small alley led me to the street of the brass workers, which probably hasn’t changed since the middle ages except by the addition of gas-powered welding gear. Dozens of small garage-factories lined the street, each working on making identical ornate brass dishes and cups, all the while drinking small cups of tea distributed by messenger boys running up and down the road.

I rather regret not having hired a guide for my day in Historic Cairo.  I suspect that there is a huge amount of context that I’ve missed.  I don’t like noise or crowds, so it wasn’t the easiest day for me, but the sheer antiquity of people’s lifestyle made it well worth a visit.