It takes a long time to get to Vilnius from Warsaw. Even longer if you’re on a train with a semi-unwanted travelling companion who SIMPLY WILL NOT SHUT UP. He talked and talked until I could hardly stand it. But it was a beautiful summer’s day. The ebb and flow of his waffling swept over me like a fragrant tropical tsunami – likely to cause your death, but not unpleasant. Hundreds of kilometres of birch forest blended into a single ur-birch. Tens of thousands of words from the opposite seat blended into one ur-bollock. I was at peace.

Everyone confuses Latvia and Lithuania. I remember the difference by recalling that in the 17th century, Lithuania formed part of the Polish-Lithuanian Commonwealth, one of the weirdest political agglomerations ever developed. It featured such never-to-repeated innovations as an elected monarchy, an aristocracy which was surprisingly useful, and ownership of  huge swathes of Central and Eastern Europe. The predation of other nearby kingdoms ensured that it wasn’t to last, but it certainly looks interesting on old maps.

Captain Clingy and I disembarked from the train in Vilnius and checked into a hostel near the centre of town. Muttering something about stretching my legs, I dumped my bags and bolted in the direction of the old town before he could follow me. Perhaps he was puzzled by my sudden change in behaviour. I didn’t care, I just wanted to get out. 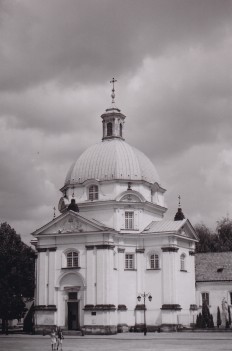 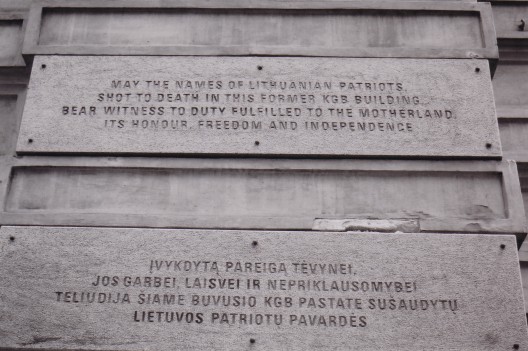 I had a pleasant afternoon. I wandered around the baroque parts of the old town, surprised at how much has survived the War. I ducked into and out of churches, a salient of Baltic Catholicism surrounded by Eastern Orthodoxy. Given how far east in Europe I was, I was expecting it all to seem far more… Eastern. Instead I felt like I was in Austria, or perhaps Slovenia. I expect that winter was is grim, but in mid-summer it was hard to dislike. I found a small stall that sold sausages and ate some mediocre mystery bags. Life was good.

Returning from my afternoon meanderings, I turned down a side street and walked past a small pub next to a building site. Walking past the door I heard it open behind me and two people leave. Senses suddenly alert, I kept moving purposefully down the road. The following feet kept pace with me. Near the end of the street, I prepared to turn the corner when I felt something cold and wet splash over the back of my head.

Someone had thrown the contents of a pint glass at the back of my head. Thankfully they didn’t include the vessel.

I turned around. Two young men, shaved heads and builders’ work gear. Both smirking. Both much larger than me.

This is the moment where self-defence gurus always tell you that you should run, preferably to somewhere you’ll be safer. They say that there’s no point trying to argue, stand your ground, and definitely not to fight. There are no good things that can happen from this situation.

But in the moment, the frustrations of the last several days, the tedious train trip, my disappointing sausage lunch, my malodorous clothes, my newly damp scalp, and the permanent mild sadness of being thousands of kilometres from home all boiled up together. I balled up my fists, took a huge lungful of air and shouted in English, at the top of my lungs,

“WHAT THE FUCK DO YOU THINK YOU’RE DOING, YOU GRINNING FUCKING CUNTS?”

In any major city in the West, that would have instantly gotten me stabbed. Perhaps they weren’t expecting me to talk back. Perhaps they didn’t speak English. Perhaps this was all an elaborate practical joke. But either way, they stopped smiling, took a step back and looked puzzled. I continued.

“I’m a fucking visitor in your country and you throw beer at me. Beer! You idiots! Get fucked!”

I wiped my head. They looked downcast. I turned and stormed off. Amazingly, they didn’t follow me. I had dodged a bullet, somehow.

Round the corner, my blood was still up and I was distinctly damp. But I was within sight of the hostel, and so I marched on in the direction of the small group of people standing outside a nearby building.

Or  I tried to, because as I got closer  I realised that one of them was Captain Clingy, and the others were Lithuanians who were shouting at him. They looked like they were trying to to decide whether to rob him or beat him unconscious. I don’t know what had happened – maybe everyone hated tourists in Vilnius, or maybe he had made an idiot of himself. Either way, I was in no mood to quietly try to resolve the issue.

I marched up to the group, and shouted

I don’t know why I bothered to be honest, because Clingy just stood there mumbling and looking confused. I’m no hero, especially on account of someone who gave me the shits so severely on such a constant basis. But perhaps I felt a kind of solidarity with him, as both of us had been molested by Lithuanians and were feeling grumpy.

I grabbed him by the scruff of the neck and marched him back to the hostel. The crowd let him go, possibly assuming that I was going to beat him senseless on their behalf.

Back at the hostel I attempted to give him a talking to. I tried to explain that he needed to be a bit more assertive, and more alert to his surroundings. But it was no use. His big dumb cow eyes gazed back at me and he yabbered about how confused he was and how thankful he was for being rescued. I gave up.

I decided that Vilnius was bullshit. After a shower to wash the beer off my head and an attempt to clean my daypack, I looked up the train timetable.

The next day we went to Latvia.

2 thoughts on “Shouty and damp in Vilnius”