I was never that much interested in the Novodevichy convent in Moscow. Judge me as you will, Russian monastic traditions never held much appeal. I was much more interested in the young Scottish woman in my youth hostel.

I was young myself, just 22, so contriving opportunities to chat with a 20 year old woman was no crime. Coming to the end of a long trip through Central and Eastern Europe, the burdens of the road were wearing on me. Travelling in Russia had been a stressful experience due to the heavy hand of post-Soviet bureaucracy and the sulky aggression of seemingly everyone I had met.

Scottish women aren’t known for their girlish charms (sorry Scottish friends), but a change of environment served to highlight her charms. These comprised chiefly of

1. Not being actively hostile

2. Speaking approximately the same language as me

We were staying in a youth hostel in Moscow, which occupied an entire floor of a Soviet apartment block. As tends to happen, vague plans were made by a group of guests one evening to visit Novodevichy convent in the morning. Apparently it was a group of monastic buildings which had survived both Napoleon and the Soviets, and therefore was an interesting example of old Russia persisting into the new.

The Scottish girl thought that this was a good plan. So I invited myself along. 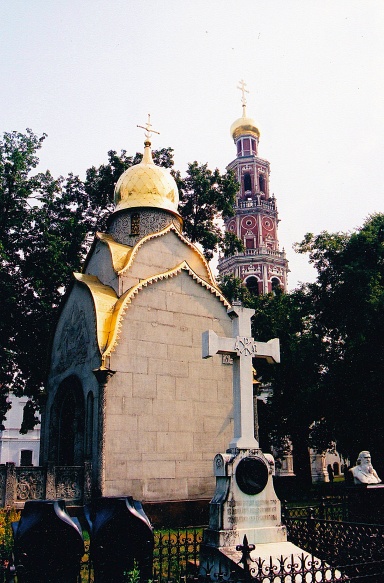 The next morning, after the usual time-wasting and procrastination, our pack of scruffy Anglophone riff-raff set off on the Moscow subway. That was an adventure in itself. The Moscow subway system attracts praise for its elaborate decoration and incredible depth beneath the surface, as parts of it were intended as nuclear bomb shelters. For me, the adventure lay in navigating the signage and byzantine ticketing system. An elderly Russian woman abused me for something when boarding the train. Our group’s low-key conversation attracted stony glares from the passengers, as if we were discussing state secrets.

On arrival we emerged to the surface blinking like moles and walked a few blocks through the dilapidated suburbs to the convent. This area had been a satellite town which was absorbed into greater Moscow, and the expressions of the passers-by suggested that, 200 years on, this was an unsatisfactory state of affairs.

The convent itself is a sprawling structure of cathedrals, chapels, cloisters and small gardens. In the tsarist period it seemed to chiefly have been used to neutralise dynastic threats to the Tsar by storing their female relatives here as “nuns”.  The convent was also a major landowner in its own right, becoming the owner of many thousands of serfs and their farming output by the time the tsarist period came to an end.

The Soviet disapproval of religion resulted in the convent being shuttered in the early parts of the 20th century, but it was reopened by Stalin in the fifties. I found this to be curious – perhaps he decided that the people’s desire for religious facilities were more important than his ideological position. Maybe by the 1950s the Communist party’s initial ardour for atheism had subsided and was replaced by a ruthless pragmatism aimed at maintaining power. 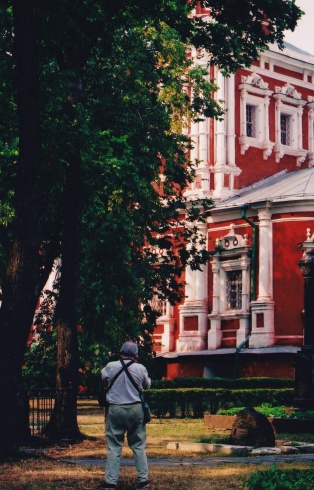 I’ll be honest – the convent really didn’t interest me very much. Perhaps I had a dose of cathedral fatigue after several month travelling. Or perhaps the “Moscow Baroque” style looked a little bit too much like many central European baroque structures, but in far worse repair. Perhaps I was hungover from the night before, unlikely though that may have been. Perhaps I was just itching to spend some more time with the Scottish girl.

I did quite like certain small elements of the ensemble, it much be said. The bright reddish-pink walls of many of the buildings were fetching. Also, I enjoyed the cemetery which was attached to the main structure. A great number of famous Russians are buried there, including Gogol and Chekhov. I’ve heard it said that people tend to return to the faith of their upbringing at the end of their lives – perhaps this explains the presence of Nikita Khrushchev’s grave. Or perhaps he wasn’t considered worthy enough to be interred along with Lenin and Stalin in the Kremlin.

The sun passed below the 45th degree and filtered its light through some trees – this was my signal to start planning for the evening. The Scottish girl and I gathered up our group and we braved the Moscow Metro again to get back to our hostel.

A strange little convenience store stood on a traffic island in the middle of a 4 lane road outside our tower block. I think it was intended to serve people driving past, in the manner of a tollbooth. We took a chance and ran across the road to knock on the window. The very surprised booth operator sold us a 500ml bottle of vodka with an unintelligible label, and we entered the hostel in triumph.

Our group made a big bowl of pasta and celebrated our day with numerous vodka tonics. The Scottish girl and I flirted quietly as we drank ours. We all made plans for the next day, perhaps a trip to one of the cheerful torture museums?

I don’t know what Russians put in their convenience-store vodka though, because my hangover commenced before I’d finished my third drink. I became suddenly very tired and noticed the frontal headache that had been creeping up for a while. This could have been caused by some very generous pours on the part of my colleagues, but I prefer to believe that it was due to some kind of radioactive isotope, or perhaps strychnine.

The Scottish girl and I stopped talking and looked at each other. Her eyes became glazed and unfocussed. Then she vomited. After a token effort to help, I went to bed, careening sideways into the toilet in the process. It was all I could do to mount into my bunk.

In the morning I felt like chunks of flesh were going to fall off my face from the pain of my self-inflicted chemotherapy. I staggered down to the Soviet-era cafeteria and ate a leftover sausage. Then I vomited.

The Scottish girl was gone. Our connection, however brief and fuelled by being lonely backpackers, was over. Where did she go? St Petersburg? Edinburgh? I never did find out.

That seemed like a good enough time to leave Russia.