It seems that everything is more beautiful and refined in Japan, and Himeji castle is no exception. Defensive constructions are not normally known for their beauty, although they can have a kind of workmanlike charm. European castles in particular tend to exude a kind of lumpen massiveness, ranging from frigid piles of bluestone in Scotland to the immense walls of the Crusader castles in the Eastern Mediterranean. The common factor of these beasts is that their design leaves no doubt regarding their intended purpose.

Himeji castle is different. Known as “Flying Egret castle” in Japanese, it resembles a bird taking flight and from a distance it could be a grand palace or even some kind of religious structure. The building’s main intention – resisting siege and protecting the occupants in time of war – is not immediately obvious. It seems far too beautiful to be anything to do with the military. It is the largest and possibly the most attractive “original” castle in Japan, which explains its inclusion on the World Heritage list.

The interesting thing about Himeji castle is that it exists at all. The version we see today dates from the early 17th century, at a time when similar structures were common across the Kansai plain. However following the Meiji restoration in 1868 and the newly unified and revitalised Japan, most of the ancient castles were demolished. There seems to be a tendency in Japan to either steamroll or idolise the past. Relics of ancient times seem to be either refined to the point of perfection (such as ikebana flower arranging) or unceremoniously paved over. The European pattern of constant accretion, renovation and modification seems weirdly absent to my foreign eyes. Himeji castle falls clearly into the “perfected” category, and now acts as a kind of shorthand for all ancient Japanese fortifications. 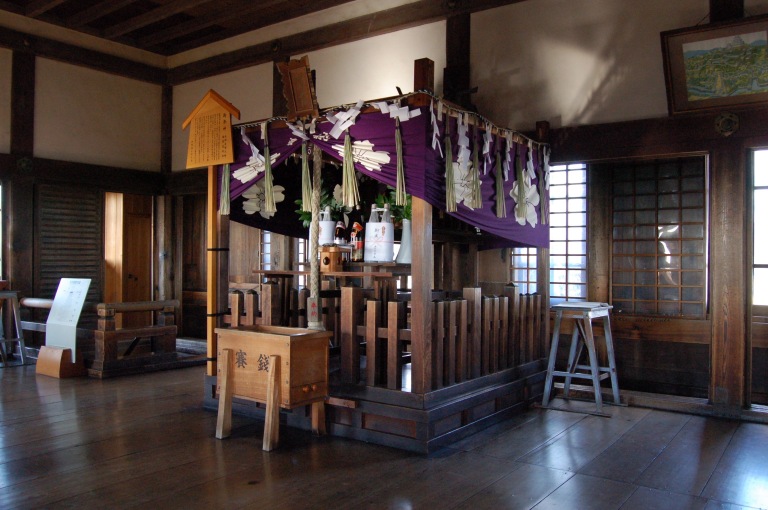 The design of the castle itself is fiendish. Built prior to the widespread use of gunpowder in Japan, it incorporates dozens of measures designed to thwart infantry armed with bows and swords. The floor plan is a maze designed to confuse attackers and delay their passage to the central keep. Walkways and walls are punctured with loopholes which allow archers to repel enemies with virtually no exposure to danger. These ideas are similar to that of European castles but at Himeji they seem woven into the fabric of the structure in such as way as to enhance its attractiveness rather than simply as functional features. The roofs swoop and flow, gutter spouts are gargoyles, and small decorative flourishes are everywhere. More than anything else Himeji resembles a Gothic church. 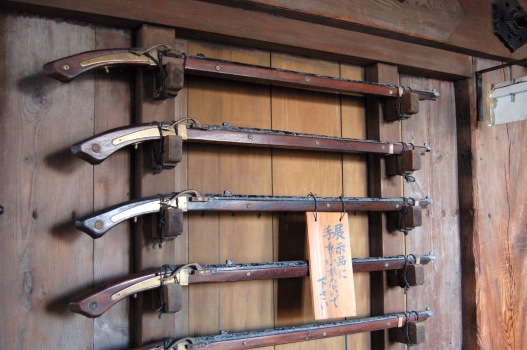 The interior is relatively spartan, which may reflect the fact that it was chiefly used as a barracks. Beautiful timber floors were the highlight for me, along with a small display of anachronistic gunpowder weapons. The bones of the building are visible in the interior in the form of huge timbers supporting the low ceiling. I do wonder how much of the spare interior design is true to its original use and how much is museum design that fits with the modern Japanese aesthetic.

Himeji castle is an easy day trip from Osaka or Kyoto and is hence a tremendously popular attraction for Japanese and foreigners alike. It’s well worth the trip, especially given the ease of Japanese public transport. My visit in 2007 was prior to the cleaning of the roof tiles, so visitors now should expect it to be even more luminously white than before.