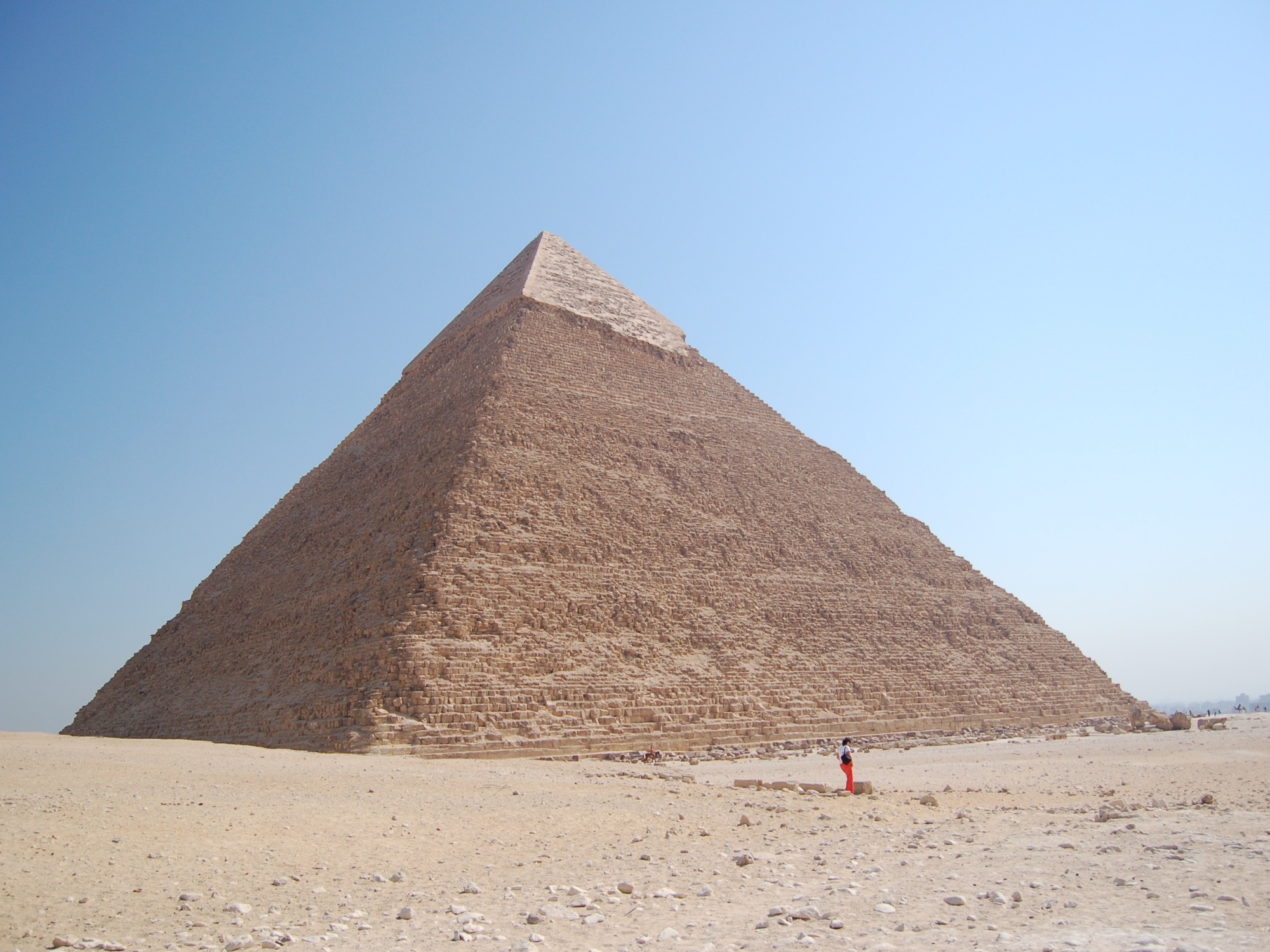 Property 86 – Memphis and its necropolis: the Pyramid fields from Giza to Dahshur, Egypt

I loved the pyramids of Egypt.  Loved them.  Or at least I think I did.  It may have been heatstroke.

I don’t think I’m exaggerating when I say that visiting the Pyramids of Giza in Egypt in 2007 was the culmination of a lifetime of dreams and aspirations.  When I was just a little kid and my contemporaries were playing football and whatever normal boys do, I was reading books about ancient Egypt.  I don’t know where my fascination came from, but I suspect being surrounded by humanities academics at home certainly helped. I spent my time leafing through textbooks, reading accounts of the discovery of Tutankhumun’s tomb and debating various methods of pyramid construction (long ramp or wrap-around ramp were the main issues).  I forced my artist grandmother to build sphinxes and pyramids out of papier mache and decorate them with hieroglyphs.  I constructed an entire Old Kingdom Egyptian funerary complex in the garden with half a ton of old bricks and planned to inter my cat in it.  I was obsessed.

Like all other obsessions, this one eventually wore off, or at least dissipated in intensity somewhat.  However I never lost my desire to visit Egypt and see the pyramids for myself. It took about another twenty years until I could make it happen, and the long delay didn’t dilute my excitement one little bit.

That was lucky, since I lacked any degree of sensible planning and visited Egypt in the middle of August.  Cairo is not a chilly place at the best of times. In the middle of August it resembles one of the inner circles of hell – Dante’s hell, not the Viking one. My brain almost combusted from the heat.  My eyeballs dried up into raisins.  I had weird mood swings consistent with being driven out of my mind by the incessant, numbing radiation emanating from the ball of fire in the sky. My Australian upbringing meant that I’m no stranger to hot weather, but this was something else entirely. The ancient Egyptians worshipped the sun, but I think they were nuts – I hated the sun and wanted it to die.

I wanted to die.

Despite the environmental factors, my enjoyment of the pyramids was relatively unaffected.  Giza is on the outskirts of Cairo and one can get there from the centre of town in a fifteen minute taxi ride.  My first glimpse of the pyramids was through the window of a filthy cab which stank of sweat-encrusted vinyl, but there was still an unmistakeable magic about seeing enormous piles of stone emerging in the distance.

And they are huge – much bigger than they seem in photos.  They’re like alien spacecraft which have landed, or strangely geometrical mountains, or simply the most astonishing thing I think I’ve ever seen.  No wonder the Erich von Danikens of the world are so convinced that they’re not made by men’s hands.

I had come early enough to avoid the worst of the crowds and get my ticket to enter the Great Pyramid of Khufu (called Cheops by Greek sources). However I had not come early enough to avoid the omnipresent touts who dogged most of my visit.  They weren’t excessively annoying, but most did seem to think that my stopping to gaze up on the greatest achievements of ancient civilization was an open invitation to sell me a tour, or a camel, or a woman.

Despite their best efforts, the touts couldn’t distract from the magnificence of the Giza Pyramids. Originally built as tombs for three of the most megalomaniacal men ever to live, they’ve managed to stand more-or less intact for the past four thousand years.  Much of the original coating of smooth sandstone was removed to construct Cairo in the 8th century AD (a small nub remains on the pyramid of Khefre).

The Great Pyramid can be entered through a tunnel, along what felt like miles of stooping and shuffling before reaching the great gallery – a 1:2 gradient, thirty feet high, with a complicated tesselation of massive granite blocks which distribute weight.  Beyond the gallery is the tomb of Khufu, the 3rd attempt at his tomb in this pyramid alone, containing only the battered remains of his granite sarcophagus.  I was fortunate in that I was able to spend some time in the interior without any other tourists, absorbing the strange peaceful-yet-funereal atmosphere.  I managed to locate the two “air shafts” leading to the outside which were originally intended for the king’s soul and avatar to escape in the direction of Sirius – unfortunately one of them has had a non-functional fan wedged in, damaging the granite wall and generally ruining the mood.

Despite the unrelenting suck of Cairo as a whole, lingering in the great pyramid for a while made it all worthwhile. I spent the rest of the morning walking around the Giza site, admiring the other pyramids including the rather anaemic (by comparison) pyramid of Menkaure which still retains the bottom few courses of its red granite casing.  The sphinx is a strange creature, more feminine and catlike than it would appear in photos, and now lying in a pit twenty feet deep due to sand drifts.  The intense heat finally got the better of me some time around noon and I trundled back to my hotel to nurture my jetlag and dehydration.

The Giza pyramids are by far the best known, but there are no shortage of other pyramids elsewhere in Egypt.  The UNESCO World Heritage listing isn’t specific to Giza – other lesser-known pyramids can be found further south.  All of the pyramids are roughly contemporary, if by contemporary you consider a thousand years to be insignificant.

The “Bent Pyramid” was sadly inaccessible at the time I visited.  The entire area is sealed off for “military purposes” and the closest I could get is several kilometres away.  The origin of the name is obvious but the cause of the kink are unclear.  The leading hypothesis is that it was found to be unstable during construction and that the angle of the sides was lowered to prevent the whole thing collapsing.  Much of the limestone facing remains, giving an idea of what the Giza pyramids would have looked like in their heyday. I find the weirdness of the Bent Pyramid somewhat appealing for reasons I can’t clearly articulate.  It reminds me of the runt of the litter, unloved but not unloveable. 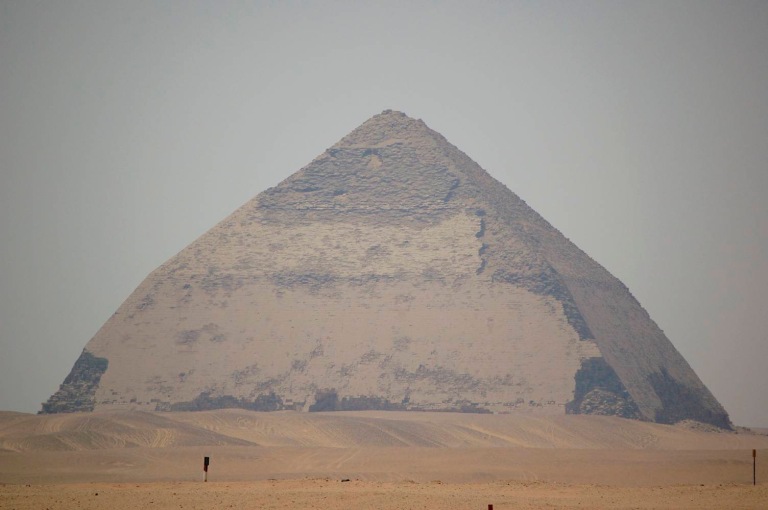 The last pyramid I visited was the grandaddy of them all – the Stepped Pyramid at Saqqara. It does’t look like much, and by comparison with the later pyramids it isn’t.  But it was the first – constructed by the pharaoh Zoser.  According to legend the pharaoh had planned to be buried under a traditional mastaba, or flat rectangle of bricks, but he lived so long that his chief architect kept adding layers. It was probably the tallest building in the world at the time of its construction, and inspired what are probably the most impressive feats of human creativity I’ve ever been privileged to see. 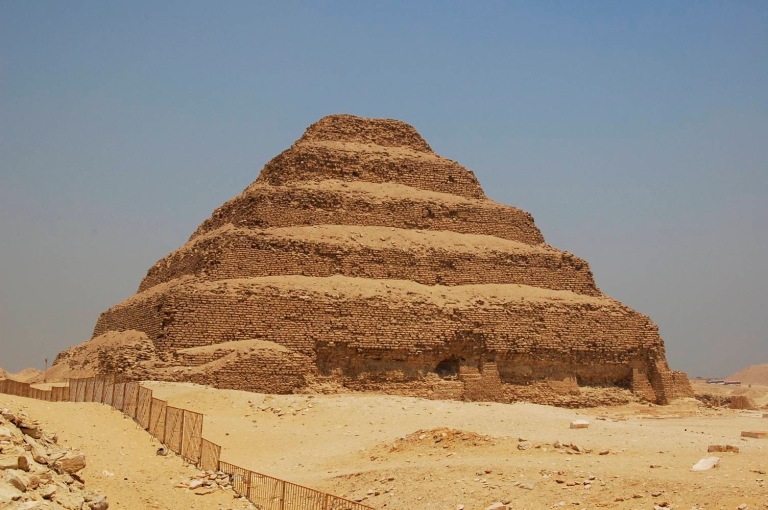 At the time of writing the political situation in Egypt may make visiting the pyramids tricky for a few years.  But depending on one’s own tolerance for social disorder, I’d encourage everyone to make the trip.  Try to see these amazing buildings not as bucket list items to be ticked off, but as their creators saw them – extraordinary feats of engineering requiring decades, thousands of lives, millions of tons of stone and the creation of the world’s first nation state.